Who Are Those Brave and Daring Female Pilots Of The 20th Century?

The Female pilots of the day get their chance. In September of 1942 General Arnold created the (WAFS) Woman Pilots Auxiliary Ferrying Squadron. They were to be based at Castle Air Base in Wilmington, Delaware. At the time Cochran was still in England working, and upon hearing about this new unit quickly headed right home. Once home she began lobbying General Arnold to create a unit of female aviators that could do much more than just ferry planes around. So in early 1943 the (WFTD) Women's Flying Training Detachment was formed as well. 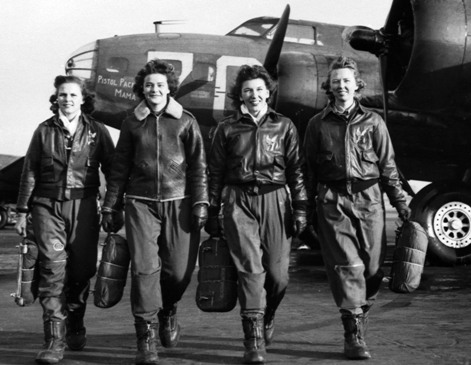 Later in the Fall of 1943 the two units of Woman's Auxiliary Ferrying Squadron and the Woman's Flying Training Detachment were merged together under one name called (WASP) Woman's Air Force Service Pilots with Jackie Cochran named as the director.While the Director of the WASP while she was stationed at Avenger School down in Sweet Water, Texas. While Cochran was there she trained hundreds of female pilots. Nancy Love would remain in command of the Woman's Ferrying Division.

Jacqueline Cochran is probably best known for being the first female pilot to break the Sound Barrier in a Conadair F-86 Sabere Jet borrowed from the Royal Canadian Air Force on May 18, 1953. Jacqueline was also considered to be one of the most gifted racing pilots of her generation. 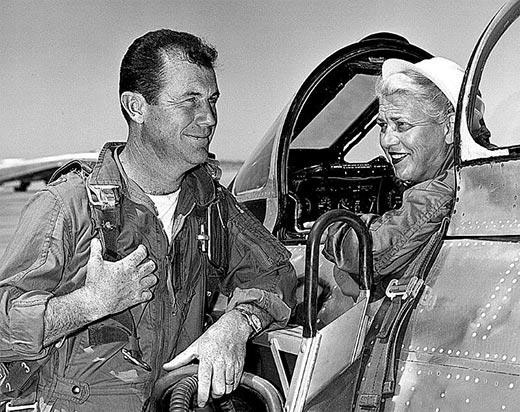 Jacqueline won many Air Races during her illustrious and exciting career in Aviation. She won five Harmon Trophies in her racing and set many long distance and altitude records. Jacqueline Cochran was also the first female pilot to fly a Bomber across the Atlantic to Britain in 1941.

In 1940 just before the war Jacqueline joined the Air Transport Auxiliary in Britain. She would openly recruit pilots for the ATA in then fly them over to Britain where they would train and then join up. Once the War broke she headed back to eventually join The newly formed (WASP) Women Airline Service Pilots outfit. After the war she joined the Air Force Reserves and set many other records.

In 1940 just before the war Jacqueline joined the Air Transport Auxiliary in Britain. She would openly recruit pilots for the ATA in then fly them over to Britain where they would train and then join up. Once the War broke she headed back to eventually join The newly formed (WASP) Women Airline Service Pilots outfit. After the war she joined the Air Force Reserves and set many other records.

Katherine Stinson was another very famous female pilot in the early 1900's. She fell in love with Aviation at an early age. Katherine was born on February 14, 1891 in Ft Payne, Alabama. She received her Pilots Certificate at age 21 and then became only the fourth woman to do this in the US. After receiving her certificate Stinson and family all moved to Antonio, Texas. A short time later Katherine & Marjorie Stinson her sister began a Flight School together.

Katherine took her flying lessons under the instruction of Max Lilie in 1911 and was so good she soloed in just 4 hours. In 1912 after receiving her flying certificate she began her exhibition flying carer. Because of her youthful looks the media quickly dubbed her the "flying school girl". While on the airshow circuit she became the first woman pilot to perform a Loop for the first time at Cicero Field in Chicago, Illinois. She went on to complete another 500 loops during her carer in exhibition flying without a single mishap of any kind.

Katherine also became one of the first female pilot authorized to carry airmail in the United States. During World War I she flew a Curtis JN-4D Jenny and had a specially designed Curtiss-Stinson built as a single seat version. Katherine flew this around Canada 0n Exhibition Tours fundraising for the American Red Cross. In 1917 the Stinson families flight school had to finally close it's doors.

Katherine finally got caught up in the war and became a US Army ambulance Driver in Europe. A short time later she contracted influenza which turned into tuberculosis. In 1920 she was forced to retire from flying. Several years later in 1928 she met and married another pilot and went to work as an Architect in Santa Fe, New Mexico until her death in 1977 at age 86.

Known as the "Flying Debutant" Ruth Nichols joins the famous ranks of female pilots. Ruth was born in New York City on February 23, 1901 to Erickson Norman & Edith Corlis. Ruth began flying lessons in secret while attending Wellesley College working toward her Medical Degree, and received her pilots license after graduation in 1924. A short time later she became the first woman pilot to receive her Hydroplane license. 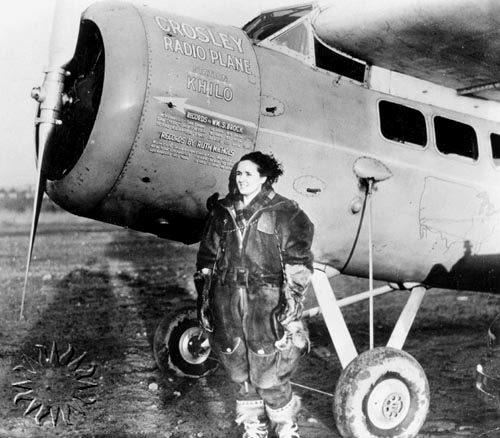 Picture From The Smithsonian.

In January of 1928 Ruth and her former flying instructor flew non stop from New York to Miami and this was her first claim to fame after this flight. In 1929 Ruth became a founding member of the Ninety-Nines, along with Amelia Earhart. This was an organization of licensed female pilots. A short time later she was hired as a Sales Manager by Fairchild Aviation Corporation. While working for them and others flying her Lockheed Vega, she went on to set many new Endurance, Speed,and Altitude records in the early 1930s.

While trying to become the first female pilot to cross the Atlantic she crash landed in New Brunswick. She was severely injured but was able to return to flying in June of that year. In 1932 Ruth became the first woman pilot to fly a commercial passenger airliner from New York to New England. On the 21st of December 1935 Ruth was critically injured while barnstorming in Troy, New York. After a year of rehab and rest she was once again able to begin flying again.

During World War II Ruth headed up a program called Relief Wings in 1939. This service performed emergency relief flights and worked closely with the Civil Air Patrol. Ruth obtained the rank of Lieutenant Colonel in the (CAP). In 1958 Ruth lobbied the Air Force to let her fly Co-Pilot in the TF-102A Delta Dagger which she did. During that flight she became the first female pilot to fly over 1000 miles per hour and reached an altitude of 51,000 feet. She became the first woman to ever achieve this at age 57.

In 1959 Ruth Nichols and several other woman were involved with the Mercury space program. But it was eventually dropped and never really came to be at that time. In 1960 Ruth Nichols died from a drug overdose at her house in New York city. During her illustrious flying carer, Ruth flew every type of plane there was to be flown. In 1992 Ruth Nichols was posthumously inducted into the Hall of Fame. She was truly a pioneer in the Golden Age of Aviation.

Another female pilot from the "Golden Age of Flying" was Nancy Bird Walton from Australia. In 1930 at the young age of 19 Nancy achieved her number one goal and dream she obtained her Pilots License. From the time she was old enough to walk she wanted to fly, how incredable is that! Not long after she bought her first plane, which was a De Havilland Gipsy Moth. She and her friends began their barnstorming carers. Everywhere they went they always found people waiting to go up and experience the thrill of flying.

Picture From The Australian National Archives.

Sometime later Nancy met Reverend Stanley Drummond who wanted her to fly medical supplies into the back country. In 1935 Nancy started flying for the "Far West Childrens Health Scheme". She sold her plane to be used as an Air Ambulance, and proceeded in buying a better equipped plane for flying supplies in. She loved the work and it was truly one of the more rewarding jobs she did.

In 1936 she won the Ladies Trophy for an Air Race from Adelaide to Brisbane. After that race Nancy decided to rest from flying for awhile. Two years later when World War II broke out, she returned to Australia and began training female pilots to assist the men in the Royal Australian Air Force. At age 24 Nancy married an Englishman, Charles Walton, and had two kids. In 1950 Nancy founded the Australian Woman Pilots Association "AWPA" and remained the President for the next five years.

In 1958 after a twenty year retirement from flying Nancy Walton returned to flying again. She became Patron of the "AWPA" in 1983 after the death of former Patron Lady Casey. Throughout her entire life Nancy donated to many charities and people in need. On January 13th 2009 Nancy Bird Walton passed away at the grand old age of 93 having lived a great life. In her entire flying carer she never had any kind of flying accident. She definitely will be remembered as one of the true famous female pilots of the Golden Age of Flying.

Thanks so much for flying in and checking out our new Famous Pilots Pages 1-2. As always, stay safe and "Happy Flying".

Return From Female Pilots 2 back to Pilot-planes.com